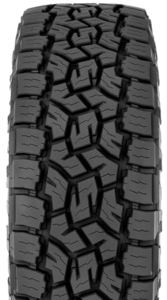 The Toyo Open Country A/T III is an all-terrain tire made for light trucks with enhanced off-road capabilities and all-season usage.

It is an on-off-road all-terrain tire with the M+S symbol sometimes used as Original Equipment (O.E.) on light and medium-duty 4WD truck, pickup, and sport utility vehicles.

The tire was introduced in March 2020 with various sizes ranging from 15- to 20” rim diameters.

You will get to know more about this new addition in this Toyo Open Country A/T III review. 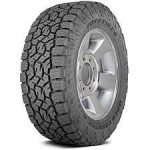 It comes with a new tread compound and design to provide confident wet braking and good handling.

The tire is built with a cut-and-chip resistance for good off-road gripping and stone ejecting blocks for a quiet ride.

For now, this is available for sizes with Outline White Lettering (OWL) on the serial side only.

Workmanship and material warranty of first 1/32″ of wear, 5 years or free replacement for first 25% tire wear then prorated to final 2/32” of the remaining depth and Manufacturer’s special warranty of ‘No Regrets 500 Mile’ or 45 Day Trial. 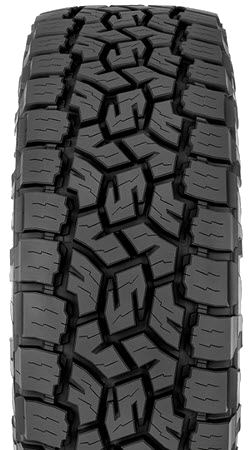 The company says additional SKUs up to 22” rim diameter will be available later.

Being an all-weather all-terrain tire, Open Country A/T III will greatly be ideal for your light truck comfort drive.

As a result of the cut-and-chip resistance and stone ejecting blocks, good off-road gripping and the relatively noiseless ride are assured.

Even though the new tire comes with limited available sizes of between 15 – to 20” rim diameters, for now, the company says additional SKUs up to 22” rim diameter will be available later.

It is our hope that you will find our Toyo Open Country A/T III review informative enough to aid your good decision-making.

If you have a comment, question, or review of this tire, kindly leave it in the box below.

Click here to check the review of the Open Country AT II.