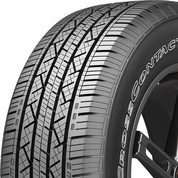 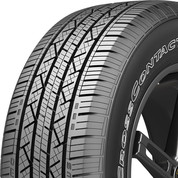 In this continental crosscontact LX25 review we will be checking what improvement continental as done concerning this tire which makes it different from its predecessor.

For what type of driver

Crosscontact LX25 is designed for drivers of crossover and small SUV that wants a comfortable drive with all season traction on most driving surface including light snow.

The continental crosscontact LX25 is equipped with 6 years or 70,000 miles for the H and T speed rated.

It comes with uniformity warranty for the first year or first 2/32 inch of wear then prorated until the last 2/32 depth.

Road hazard warranty for the first year or first 2/32 inch, although there are terms and condition applied so you should check with continental first.

This tire also comes with a 60 days trial from continental and 3 years road side assistance.

About the new LX25

The new continental LX25 is the successor to the former LX20 which is an exceptional all-season touring tire. The LX20 is built for light truck, SUV and crossover with an asymmetric tread design. And they both have the Ecoplus technology in common, for the LX25 there is improved wet braking compared to the LX20.

The LX25 is also given some attention when it comes to its style as it is styled to complement any vehicle it is paired with. It is also designed to be quiet and it features the quickview indicator that keeps the driver informed about the tire performance.

In essence the crosscontact LX25 is an improved version of the LX20 which as been on the market since 2011 and has proven to deliver quality and excellence.

The LX25 improvement is more notable with its longer tread life and improved wet braking, as stated by continental. It comes with a UTQG rating of 740AA with speed ratings of H, T and V.

The LX25 is available in a wide range of sizes ranging from 16’’ to 20’’ inch rim diameters. This tire provides a good level of comfort, good grip and fuel efficiency.

Conclusion of our Crosscontact LX25 review

We hope you find our crosscontact LX25 review helpful, this tire is an improved version of its predecessor which is the LX20.

LX20 as proven to deliver a good deal of performance and it has remained a relevant tire since 2011 because of the excellence and success it is.

So, the improved version wouldn’t deliver less, you can try out the 60-day customer satisfaction to get a conviction about its abilities and performance.

If you have a review concerning this tire or comment or question, leave it in the comment box below, we will be glad to hear from you.