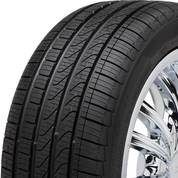 The Pirelli p7 all season plus is an all-season touring tire that is designed to give all season feel and a great deal of traction in most weather driving conditions. This tire is made for luxury and touring cars, giving the driver a comfortable ride, precise handling and all-season traction.

Comes with the Pirelli’s eco impact icons which indicates the Pirelli cinturato p7 is environmentally friendly and therefore its existence does not cause havoc to human and its environment.

Find out more about this tire in this pirelli cinturato p7 all season plus reviews, you might just find this tire interesting.

For what type of driver

This tire is designed for luxury and touring car drivers, that appreciates an all-season touring feel. With great traction on most driving surfaces and precise handling.

The Pirelli cinturato P7 comes with a 30 days customer satisfaction warranty, so you can give it a try and if it doesn’t suit your driving style or performs less than expected then you can return for an exchange.

Has a 70,000-mile tread life warranty and a one year or first 2/32-inch wear guarantee on the tire’s uniformity.

There is no road hazard warranty however, it comes with unlimited number of years of materials and workmanship. Also, first year or first 2/32-inch wear comes with a free replacement then it is prorated until the last 2/32-inch tread depth

The Pirelli P7 all season plus is an exceptional all-season tire with an ecofriendly technology. It doesn’t fall short in its performance on most driving condition, we say one of the best pirelli tire.

You won’t be disappointed with the p7 all season plus wen it comes to its performance on dry driving surface.

Traction on dry surface is good, you get good cornering grip and steering ability are precise in any speed range, you get stability and feel in control while driving this tire on dry surface.

Gives good traction on wet surface, and you can’t be bothered by hydroplaning risks. Good wet grip while driving and great overall performance is what you get on wet driving surface.

You get a good performance when driving on light snow but they are not recommended in extreme winter driving surfaces, you will be better off with a winter tire.

The cinturato p7 all season plus is available in sizes from 16 to 20 inches, and with H or V-speed ratings

The cinturato P7 all season plus tire as proven itself beyond adequate when it comes to a touring all season performance. Also, in fuel efficiency, comfortable driving, snow performance, steering abilities and its environmental friendliness.

From our consumer experience point of view during this pirelli cinturato p7 all season plus reviews, we say it is an excellent touring tire and a good choice to buy.

If you have any comment, reviews or question leave it in the comment box below, we will be glad to hear from you.