The AltiMAX RT43 is an On-and Off-Road all-weather H-rated, T-rated, and V-rated touring all-season tire made to meet the needs of a coupe, sedan, minivans, and crossover driver who cares for comfort, great handling control, confidence, and durability. ]

The General Altimax RT43 was introduced in July 2013 to replace the Altimax RT with much-improved technology and upgrading devices.

Let us dive more into the General AltiMAX RT43 reviews and get to know if it is an excellent tire. 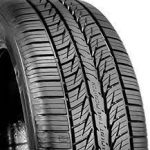 You will enjoy its good grip on the wet and dry surface, as well as any wintry condition.

The AltiMAX RT43 combines a quiet, comfortable ride with year-round, all-season traction, even on light snow.

The Altimax RT43 tires give a smooth quiet ride and have increased tread life qualities.

It wears evenly, is durable, and comes in a wide range of sizes.

The AltiMAX RT43 has a Visual Alignment Indicator (VAI) which extends the lifespan of the tire by identifying misalignment and a Replacement Tire Monitor (RTM) stamp that informs the need for replacement when the need arises as indicated by the tread level.

They have a tread design that offers anti-slip technology which increases control in winter driving conditions.

The AltiMAX RT43 (Road Touring) is a member of numerous AltiMAX family brands with H-or V-speed ratings that is good for drivers of Coupes, Sedans, Minivans, and Crossovers.

Other warranties include special manufacturer’s Warranty of 45-Day or 1st 2/32” ‘Customer Satisfaction Trial’ and Workmanship and material warranty of 6 years or free replacement first year or 2/32” of wear then, prorated to final 2/32” of the remaining depth.

You can check our tire size calculator if you will be needing one.

The two steel belts support the spirally wrapped polyamide to stabilize the tread area for good handling while the polyester cord affixed to the body promotes a comfortable ride.

You will find it affordable while it affords you a comfortable ride on both dry and wet surfaces for all seasons and all-weather.

The AltiMAX RT43 (Road Touring) is a good tire, a great choice for drivers of Coupes, Sedans, Minivans, and Crossovers, which you will find affordable with a comfortable ride on both dry and wet surfaces for all seasons and weather.

It wears evenly, has firm grips on wet and dry surfaces, light snow, and any wintry conditions.

It comes in different sizes and lasts longer compared to other available brands.

We hope you will find our General AltiMAX RT43 reviews an interesting guide to aid you in making a good choice for your next purchase.

If you have a review of this tire, comment, or question, kindly leave it in the box below, and we will be glad to hear from you.