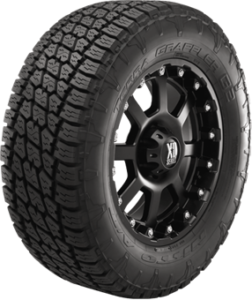 It began manufacturing tires in the ‘80s, thus becoming the first Japanese company to produce tires in the United States.

The company is encouraged by a passion to produce tires for drivers with diverse needs, ranging from pleasure rides to light commercial haulage.

In this article, we will be giving you more information about Nitto AT tires – Terra Grappler G2 A/T, Terra Grappler A/T Light Truck 4X4, and Nitto Ridge Grappler Tire. 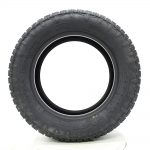 It comes with a Manufacturer’s tread-life warranty of 50,000 miles for light trucks and 65,000 miles for SUVs and a tread-wear of about 85,000km, wearing evenly after a considerable period of usage.

As you cruise to work, towing a trailer, or head up to your mountain trail you will find the tires balanced off-road and on-road performance supportive and dependable till you get to your destination.

You will enjoy its low noise while driving thereby giving you the maximum comfort you can expect on the wheel.

You need not worry about cruising on mud, rough and rocky surfaces because it affords you the stability and perfect handling needed.

Besides, it is affordable, durable, and stable on the road.

Being that the Terra Grappler tires have been popular all-terrain tires for several years, this new and even better model will certainly become more popular, being that it definitely has excellent performance. 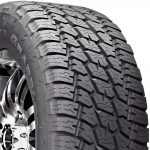 It offers considerable comfort and low noise with guaranteed balanced performance in all weather conditions.

The traction is excellent with luxury handling in mud and soft sand in most all-year-round driving conditions including light snow.

The Terra Grappler 4×4 all-terrain tire is affordable as well as dependable as you can control its stability even at high speed.

The commendable even tread-wear after about 75,000km coverage and the Manufacturer’s tread-life warranty of 50,000 miles for light trucks and 65,000 miles for SUVs put your mind at rest.

You can audibly enjoy your car stereo while driving courtesy of low noise radiation from the tires.

What’s more -the tread-life is longer and its firm grip on the road surface is higher compared with other types.

However, you may not enjoy the best of this tire on heavy snow.

Even though some users claimed that road noise is an issue, we need to say that this is an aggressive all-terrain tire and road noise should be expected. 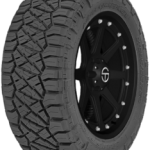 The Ridge Grappler combines the durability of the Trail Grappler mud-terrain with the comfort and longevity of Terra Grappler all-terrain brands.

It is the upcoming generation version of all Nitto’s Grappler series designed specially to tackle any terrain with confidence.

This is a multi-purpose tire suitable for all safety-minded 4-wheel drivers which provide a quiet, comfortable ride.

The great thing about this tire is that there is no annoying road noise making the ride more comfortable.

The three brands are top quality, pocket-friendly, all-weather good, excellent performance with longer wear-years that you will gladly wish to buy depending on your choice any time any day.

You will not have any regret choosing any as justified value for your money is guaranteed and as long as it suits your driving condition.

We hope you will find our Nitto AT tires review interesting and fascinating towards making the right choice.